The Library of a Young, Country Lawyer

A look at the library of a Chambersburg lawyer, William Chambers, from 1823.

You can tell a lot about people by their bookshelves. They are journeys into their pasts, into what they’ve cherished and studied for years, and what they were proud to have kept and put on display. They are journeys into their futures, into what they had hoped to one day become, their dreams and aspirations. The past, present, and future all shelved side-by-side and laid bare for any visitor’s discerning eye. A rare treat it is to browse another’s books and discover new titles or find shared interests and literary tastes. There is a special connection, a bond that is forged. Rarer still is the ability to travel back in time and be able to peruse the shelves of a personal library from 200 years ago, to witness the owner’s past and future, and forge those same bonds. This is what we are able to do with the recently rediscovered inventory of the library of William Chambers.

Not much remains in the historical record for Chambers. He was a lawyer. He lived in Chambersburg, but owned property in Hamilton and Southampton Townships. He was the son of Revolutionary War veteran Capt. Benjamin Chambers, and the grandson of Col. Benjamin Chambers, founder of Chambersburg. His brother, George, had a long and successful career as a jurist, eventually serving as a justice on the Pennsylvania Supreme Court. William was born in 1796, and died in 1823. He was only 27 years old when he died, which makes his already impressive collection of books even more so.

The few facts we have regarding William Chambers can be given a bit of supplemental color to perhaps provide a fuller picture of the man through details gleaned from his library. Other estate papers from around the time usually only listed common household items (bedding, mirrors, tables, etc.) and maybe livestock if the deceased owned any. When books were listed, they typically appeared as part of a lot of books, rather than being individually cataloged like for the collection owned by Chambers. This shows the great care and love Chambers had for his library, and that his executors knew of his love for the books, as they painstakingly listed and appraised each title, 266 volumes in total.

The titles themselves offer their own unique insights. Over a quarter of the books are law books, as one would expect a lawyer to have, but they all are considered the classic treatises for their topics at the time, such as William Blackstone’s A Discourse on the Study of Law. The non-legal books show a man with wide-ranging interests, from history to economics to poetry to chemistry. Chambers appeared to be deeply interested in the foundation of America, and in reading what the founding fathers read and were inspired by, works like Cesare Beccaria’s On Crime and Punishment and Emer de Vattel’s The Law of Nations. As nods to his Scottish ancestry, Chambers included works of prominent Scottish writers and thinkers like Hugh Blair, William Duncan, and George Campbell. Alongside the classics (Shakespeare, Plutarch, Horace, and Alexander Pope’s translations of Homer), there were modern classics (Sir Walter Scott, Lord Byron, and Adam Smith). You get the sense that when Chambers wanted to read for pleasure, his nightstand would be populated by a book of poems by Lord Byron or Mary Russell Mitford. Perhaps when he needed a laugh or to be cheered up, he reached for some homegrown satire from Washington Irving’s Salmagundi magazine or John Trumbull’s M’Fingal, or some British satire like William Combe’s Letters of the Late Lord Lyttleton or John Arbuthnot’s The History of John Bull. If his library shows us anything, it is that William Chambers was a man with an insatiable, inquisitive mind.

Below you can explore the books in his library by hovering over the blue dot beside each title, and for some titles there are fun facts about the book or author. You can click on the blue dot to take you to a copy of that book. To explore other estate papers or holdings in the Franklin County Archives, please visit our online repository. 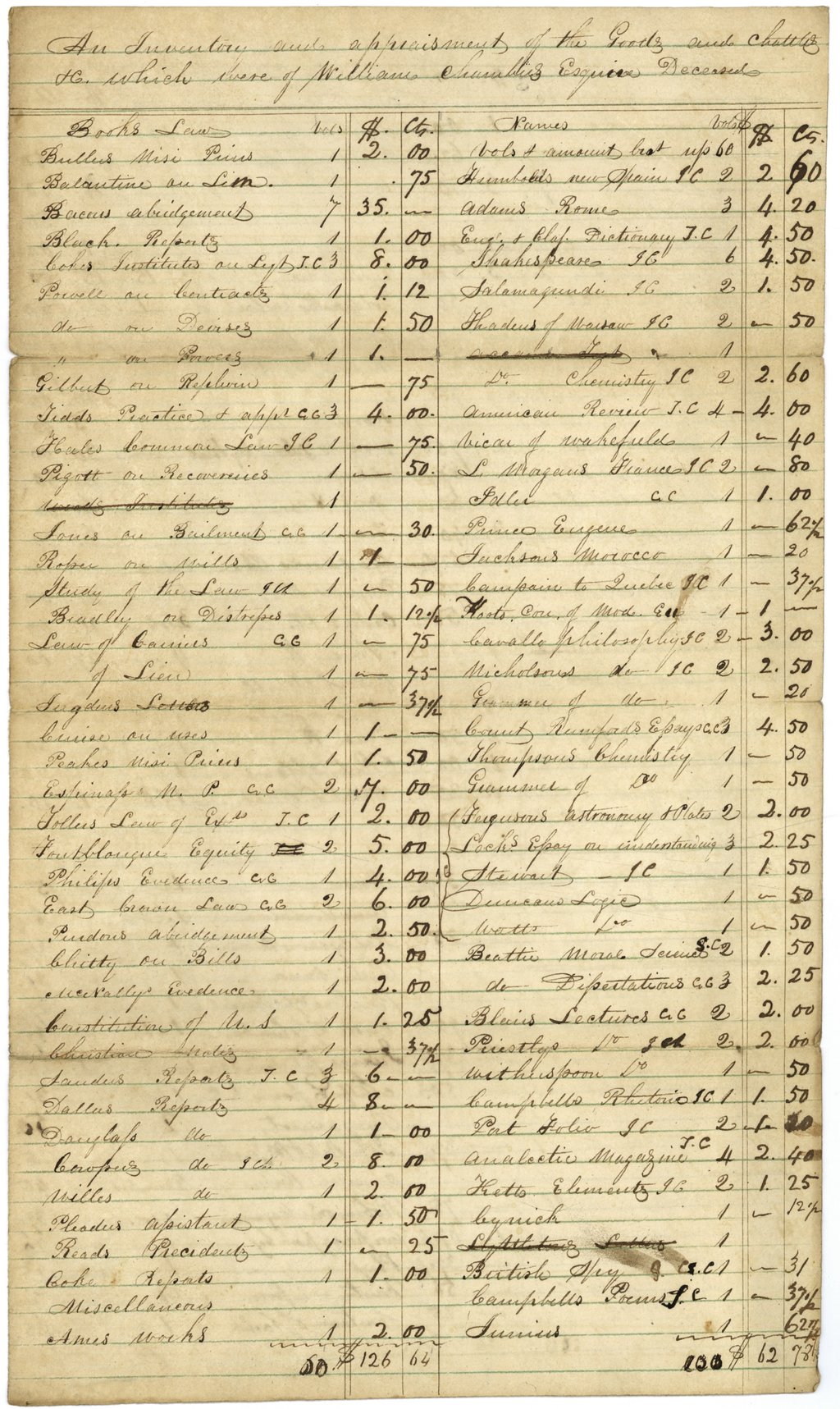 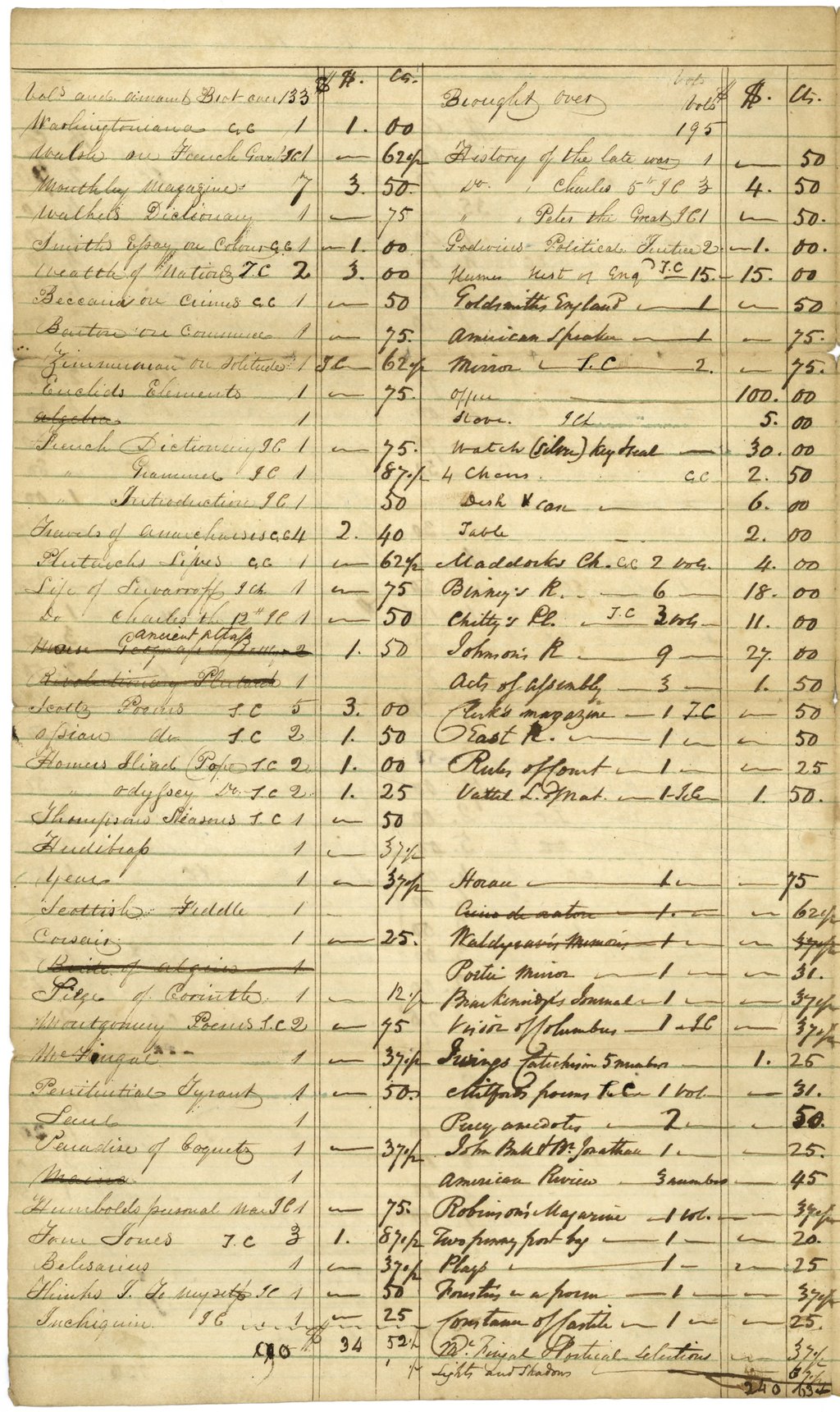 Closed on weekends and all County observed holidays.

We welcome visitors at any time during our public hours. To better assist you, we recommend making an appointment.